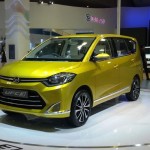 The Japanese carmaker Daihatsu has recently revealed its UFC-3 Concept at the Indonesian Motor Show. The UFC-3 follows the UFC and UFC-2 concept cars that were officially presented to the public at the same motor show in the past years. The Daihatsu UFC-3 Concept actually looks closer to production form than its predecessor, the UFC-2. […]