A prototype of a mid-engined Hyundai Veloster has been spied. The car has been caught on camera while testing in South Korea. Back in March last year the car makers unveiled the Veloster Midship – concept that ran on a 2.0-liter four-cylinder turbocharged gasoline engine giving 300 HP (220 kW).

Though no official details have been made public about the Veloster’s aspect it seems the new Hyundai is quite daring. The vehicle has two-tone paint, while the doors and mirrors are painted in silver. As it can be seen from the images the car has is painted in black. 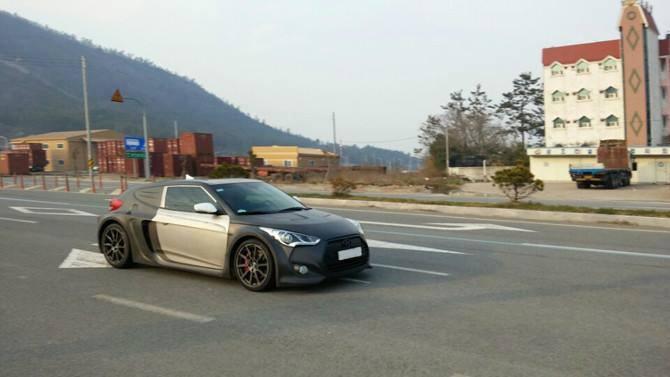 The car benefits from a wider body. Changes are notable in the back too as the rear end hosts some massive vents. List also counts strengthened chassis and a lighter aluminum suspension.

However the car won’t be available pretty soon as according to the car makers the model was only developed to ” explore the possibilities for the Veloster chassis.”

It seems the new Veloster might be launched with a mid-engine layout or totally dropped, so until further official news everything remains a mystery.