A more powerful version of the famous McLaren 650 S Coupe called most likely McLaren 675 LT will go into production. The information has recently been confirmed by the car maker after having been just a rumour for a long time. As it is known by now the debut of the car is closer than we imagined or expected.

McLaren 675 LT will be officially unveiled at the Geneva Motor Show in March and will most likely pay homage to the 1997 F1 GTR “Long Tail.” According to information available so far only 250 units of the car will be produced. 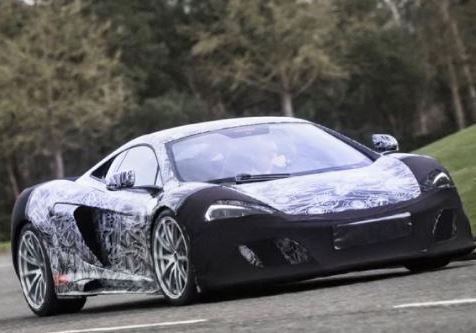 It is also important to mention that the teaser shows the new McLaren 675 LT has lower positioned air intakes. Under hood arsenal is a reason for joy as McLaren 675 LTD will run on a turbo V8 3.8-liter engine that will be upgraded to 675 HP (496 kW).

As far as the aspect of the car the teaser that has been released uncovers a part of the mysteries. Though the car is heavily comouflaged we can see that it benefits from style interventions, having an elongated rear end.

Most likely the biggest change is expected in size as the new McLaren 675 LT is promised to be 100 kg (220 lbs) lighter.