With the upcoming 2017 Frankfurt Motor Show opening its gates on September 12, plenty of carmakers worldwide are already previewing their latest models. One of them is Seat, the well-known Spanish manufacturer announcing the arrival of the 2018 Leon Cupra R in a first video.

We all know that all Cupra variants from Seat are extremely sporty and high-performance in the engine department. The new 2018 Cupra R makes no exception, standing out from the crowd with good looks, new sports features and plenty of power.

To cope with that kind of power, the model must also feel rigid and stable on the roads. This is why the new Leon Cupra R comes with Dynamic Chassis Control for the new adaptive suspension, modified camber up front and Brembo brakes. The power of the car is also enhanced thanks to the new sports exhaust system.

Visually, the 2018 Seat Leon Cupra R comes with a choice of high-end exterior colours, such as Midnight Black, Matte Grey or Pyrenees.

As we can depict from the video and the couple of photos, the Cupra R features front and rear spoilers with carbon fiber tweaks, adding as well side skirts and rear diffuser, copper wing mirrors, new design for the air intakes and fresh alloy wheels. Inside, the cabin complements the exterior with coppered accents, Alcantara stitching on the steering wheel and gearstick, and more.

Prices are not known at the moment, but given the limited-run of just 799 units, it should be a spicy one. Stay tuned for more details, and don’t forget to admire the new 2018 Seat Leon Cupra R in the first video preview! 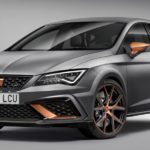 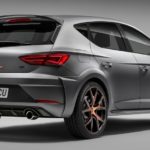